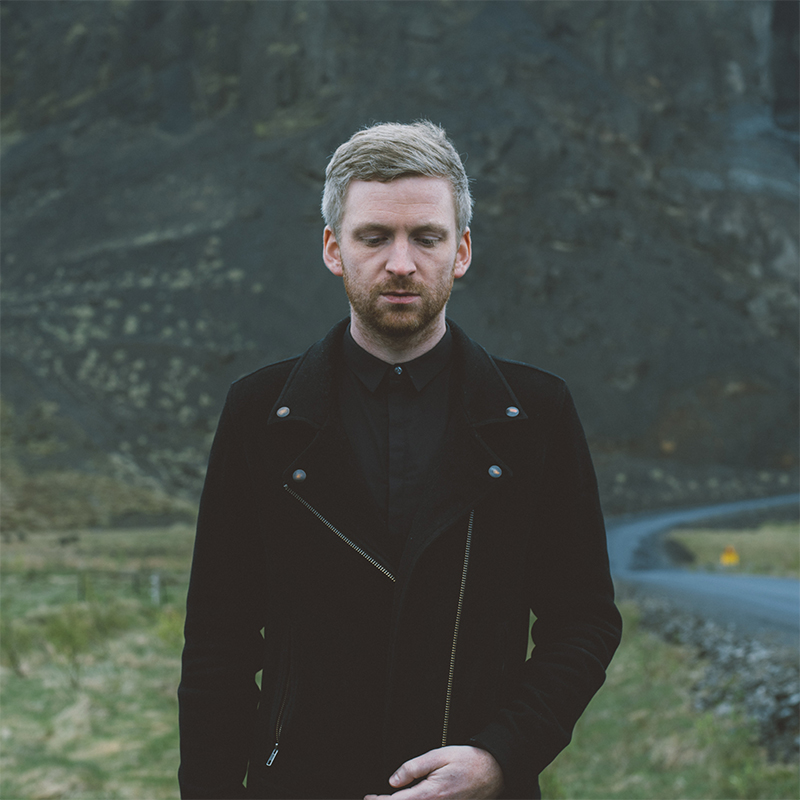 There’s one thing that people the world over have learnt these past few pandemic-filled months, it’s that for all our best-laid plans, chaos will always win.

This, Icelandic composer Ólafur Arnalds discussed with a close friend back in January, at his second home in Bali, as they ate dinner and listened to the demos of tracks he’d started in September. The idea for ‘some kind of peace’ was born.

“He started talking about how we can't control anything that happens to us,” Ólafur recalls. “All we can do is control how we react to what life gives us. That just totally clicked; to me the music symbolises that reaction. It was one of those moments where suddenly everything you're doing makes sense.”

More than ever, Ólafur - a self-confessed control freak, as he says everyone who’s worked with him will attest - had started to think about this need to stay in control. After all, his recurring nightmare for the past decade is all about losing control. Each time, he’s about to walk onstage for a show, or start playing to the crowd, and something is going terribly wrong. “But the key thing is,” he explains, the fear almost evident in his voice, “it's someone else's fault, so I can't fix it. It's completely out of my control. This is my nightmare.”

It is of course this very… let’s call it attention to detail, that contributed to making the Mercury KX-signed Ólafur a globally-celebrated artist who dominates both the electronic and modern-classical worlds, thanks to his masterful blending of symphonic strings and piano with subtle electronica. His post-minimalist and delicate compositions of haunting, atmospheric beauty were heard on an astounding 140+ date world tour in 2018-19, when he sold out concert venues around the globe including the Royal Albert Hall.

Still, just as Ólafur was tackling his tendency for control, COVID-19 sent the world into lockdown, and he was forced to put his thinking into practice. “Many things I've worked on the last couple of years, to try to fix this part of my life, have been confirmed by this pandemic. When we were first stuck at home, this crazy anxiety gripped me. Why? Because I needed to control the situation. And as soon as I acknowledged that, things became easier. This album is very much about letting go.”

Since he launched his career writing neoclassical compositions for a German metal band, and later supporting fellow Icelandic act Sigur Rós, Arnalds has forged an oeuvre full of impressive innovations. His 2007 debut album documented life’s journey from birth to death, and his 2008 follow-up, the EP ‘Variations of Static’, earned him accolades from both the contemporary and classical fields. For his 2009 series 'Found Songs' he recorded a song a day for seven days, making each instantly available online. In 2011, ‘Living Room Music’ repeated the improvisational format with video uploads, while for 2016’s ‘Island Songs’ he made his way around seven different Icelandic towns over seven weeks to collaborate with seven diverse musicians, releasing a song and video each week.

His endless thirst for challenge has seen him compose the dance score 'Dyad 1909', for the award-winning choreographer Wayne McGregor, which premiered at Sadler’s Wells in 2009 and was broadcast on television. He won the 2014 BAFTA TV Craft Award for Best Original Music for the ITV series ‘Broadchurch’ and composed the score for the Ron Krauss film ‘Gimme Shelter’ and featured on soundtracks for films including ‘The Hunger Games’. In July, Ólafur achieved an Emmy nomination for ‘Outstanding Original Main Title Theme Music’ after writing the theme to the Apple TV+ series ‘Defending Jacob’ (2020).

He also releases music in the experimental techno duo Kiasmos and has collaborated extensively with German pianist/composer Nils Frahm on improvised performances and recordings. In 2015 he worked on a re-imagining of pieces by Frédéric Chopin.

While Ólafur’s previous album, 2018’s ‘re:member’, was a technological triumph featuring his ground-breaking, patented, self-playing and semi-generative Stratus Pianos, the beautiful ‘some kind of peace’ strips back the layers to reveal the human side and the intimate.

“‘re:member’ was very much all about making these kind of grandiose concepts out of these ideas. But I started to see these concepts as something you can hide behind. It's a very comfortable place to be,” he laughs. “I wanted to make something a little bit more vulnerable. And I realised that's actually more difficult.”

Ólafur reflected on the music that most inspires him and found that one of the key characteristics is vulnerability. “In the music I listen to, that's the element I look for, so why am I hiding behind concepts?”

He describes the epistemological shock that led him to the realisation that the world was completely different to what he’d thought. This trigger prompted him to write about his experiences of the past year and the new life changes and perspectives they brought. By the time the pandemic struck, he had already written half the album, and the rest flowed freely.

What resulted is ‘some kind of peace’ being Ólafur’s most personal record to date, one that’s open and honest.

“It's so personal that I'm still trying to find the words to talk about it,” he says with a smile. “I felt it was important that the album would tell my story in a very honest way. This album is much closer to my heart than any of the others.”

What those new perspectives did for Ólafur is to open him up for the possibilities of love and settling down. “This album is almost an awakening for me to a completely new life that I don't think I would have been ready for otherwise. I'm in a very happy relationship now that I don't think I would be if I hadn't had the shock to my system, because I just wouldn't have been open to it. So this album is very much about love. It's about daring to be in love and not being afraid of it.”

Listen to the album and you’ll hear the hints of those personal experiences, sometimes even the recordings of the significant events themselves. You will hear life-changing rituals in “Woven Song”, an intimate shared moment that starts off the tenderly wrought piano composition “We Contain Multitudes”. The ethereal wall of voices in the dreamily cinematic “Zero” is a spontaneous sample from a long night in the studio.

Born in 1986 in Mosfellsbær, a few kilometres outside Reykjavík, Ólafur weaves real-world pieces of his life story throughout the album, masterfully using sampling techniques to give the listener a window into his experiences. As ever, he showcases his inimitable ability to meld genres, electronically processing classical elements such as the strings on the album.

In keeping with the personal theme, all the collaborators on the album were key to Ólafur’s life during the making of the album. British musician Bonobo, on the album’s luminous pulsing opener “Loom”, had visited him in Iceland last year, to hike, travel, and play a secret DJ show before hanging out in the studio. “Back To the Sky” features the Icelandic singer and multi-instrumentalist JFDR who Ólafur has admired for years. Meanwhile, his friend Josin, a German singer-songwriter, appears on the emotional apex, “The Bottom Line”. The dreamy song conjures the sense of a blissful re-awakening as arpeggiating piano and soaring strings swell into life-affirming ecstasy, and Josin sings from Ólafur’s perspective.

“All those people were with me at this point in my life, or the experiences that were influencing the album,” he explains. “It would be weird to make a personal album and not include my friends.”

Ólafur’s typically exquisite melancholy is stamped all over the contemplative album. One of the first seedlings for the album, the minimalist “Spiral” is graceful in its pensiveness, with its circling violin, and a nostalgia-inducing ending when Ólafur plays the melody through a 100-year-old phonograph.

The album was recorded at his studio at the harbour in downtown Reykjavik. Luckily for Ólafur, the newly designed studio was completed just before lockdown began; he won’t write a fully formed song anywhere else, and you can understand why from his alluring description of its quiet location by the ocean and the view over the fjord that Reykjavik sits on. “I can see the mountains through my window,” he says. “I really believe in how the nature of a space enhances creativity and I hold it quite sacred. I try not to write much outside the studio.”

It’s the final song that Ólafur considers the most inspirational and sums up the entire album; “Undone” features a spoken-word passage from the late American singer Lhasa de Sela against sweeping strings and delicate piano. She muses on the idea that the sensation of being born is the same as dying, and feeling like your world is ending. Ólafur says, “Occasionally in life, you feel some ripples and don't know what they are, and most of the time we choose to ignore them, and then we die and we think we're dying, but who knows, maybe we are just being born. I thought it was such a wonderful sentiment. For me the quote in that song defines the whole album.”

‘some kind of peace' is about what it means to be alive, daring to be vulnerable and the importance of rituals. It is a personal journey told through Ólafur's most introspective music to date, against the backdrop of a chaotic world. “We forget how important these rituals are in our lives. What I'm concerned about is people's mental health. I honestly believe that a big portion of our population is experiencing serious trauma right now. And I think we need to realise the effect of small things like not being able to go to a cafe every morning, something that’s a ritual in our life.”

Ólafur urges you to embrace all that life throws at you, and above all to react, and contemplate, to find your kind of peace. His stunning new album would definitely be the place to start.