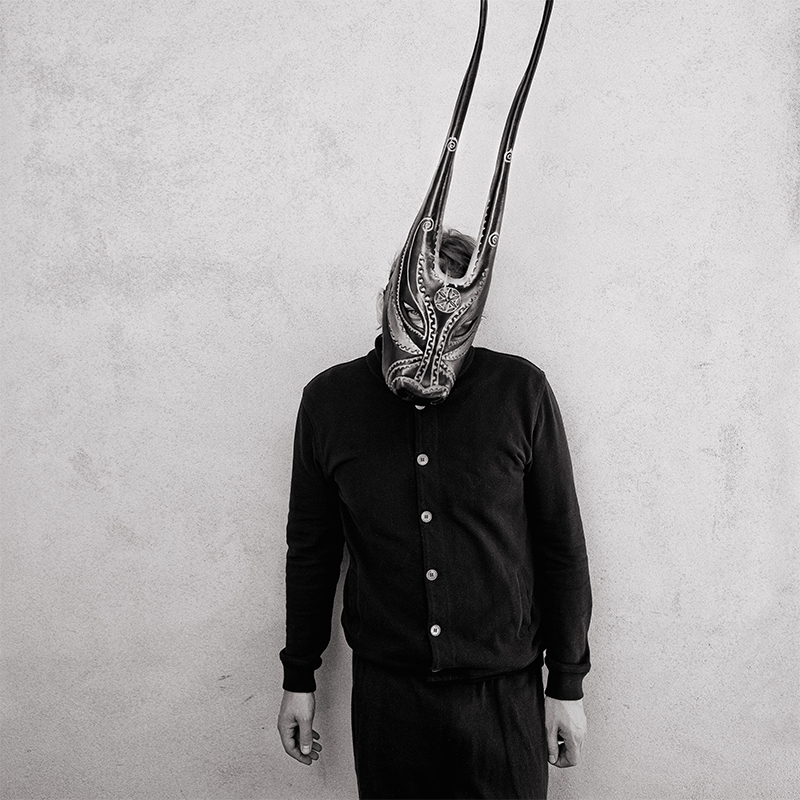 INSIDE THE LAMBIVERSE: A BEGINNER’S GUIDE TO LAMBERT by Dr Martin Stollmayr

Lambert’s sixth album False is where everything changes for the genre-defying pianist. He first emerged with 2014’s self-titled album, which ignited the world of contemporary classical music – largely because it showed Lambert was a talent too broad to be pigeonholed as “contemporary classical pianist”.

In the five years since, Lambert released an album a year, also working with English folk singer Brookln Dekker of Rue Royale on the acclaimed album We Share Phenomena and fellow German visionary Stimming on the magical EP Exodus. He also composed several wonderful soundtracks.

Live shows became an essential event, evenings of mystique and wonder as the dazzling musicianship of Lambert’s trio was conveyed while wearing matching horned Sardinian masks.

Never seen without his mask as his music became yet more accomplished, speculation naturally intensified as to Lambert’s identity. Rumours grew that Lambert had opened a camp where he trained promising musicians how to “become Lambert”. In exploring the meanings of identity, Lambert’s 2019 album was called True. Calling his new album False seems a natural next step – and it’s a stunning record, where Lambert explodes all the known truths of Lambert’s Universe, or the Lambiverse, if you will.

Firstly, all 14 pieces on False are collaborations. This results in Lambert’s most dazzlingly diverse album yet. False encompasses urgent breakbeats (with Tre B Mal), furious freeform jazz (aided by Pernille Solberg), gliding pedal steel Americana (from both Bob Drew and Jean Daeriou), industrial soundscapes (via Cole Collective) and even, on Room Trail collaboration ‘Spheres’, a full-on Autotuned vocal pop workout.

However, you won’t find any information on these collaborators online. Are they Lambert’s alter-egos? Graduates of the possibly-real Lambert camp? If they’re “only” alter-egos, why has Mercury KX awarded record contracts to all 14 new artists? “That was my idea,” reveals Lambert. “To motivate my crew, I have to give them some artistic space. They need their own expression, and it’s a nice way to curate new music.” These additional Lamberts’ role in False varied, as Lambert explained: “I was interested in music from my crew that’s either very close to mine or was a denial of the Lambertian influence. The revolution against Lambert or complete devotion: both paths were interesting to me.”

Anyone wishing to know more of the collaborators’ identity should view the short documentary Becoming Lambert or listen to the forthcoming 10-part podcast series that will accompany False. These seminal explorations of the Lambiverse both venture inside the Lambert camp, whose founder notes: “You see in the documentary that Lamberts need to be very focused, dedicated and modest. It is hard training, and people see that not everyone succeeds. A fear of mediocrity drives us all.” Not alter-egos, then? Well, the album is called False… Lambert reveals that even someone so willing to blur music’s boundaries was uncertain about his pop banger, ‘Spheres’. “It could be a Kanye West tune,” he notes. “It’s so very far away from what I usually do, I was initially sceptical about ‘Spheres’. But it was my road to take and eventually I went for it. I think it’s very interesting – even if it’s a one-time song.”

False also makes explicit more than ever the improvisational nature of his concerts. The frenetic ‘Juice Tonight’ and the mellow mood of False’s redemptive closer ‘I Thought Of Ian’ highlight Lambert’s love of jazz. “People don’t really notice the jazz in my music and instead call it classical,” he explains. “But the way I compose and perform is much more influenced by the way jazz musicians work with their instrument. Improvisation is key, especially when I play live. What I’m really searching for, which happens when you feel safe, is ‘Everything is possible right now.’ That’s the idea John Coltrane had in his music. It doesn’t happen every time, but it’s the aesthetic I search for again and again.”

Although only lasting 53 seconds, the mayhem of ‘Juice Tonight’ is key to False, in following the romantic ‘San Remo’. “I created False like a mixtape,” Lambert reveals. “Pieces transition into each other. That order of how tracks fit together, the diverse styles I should follow to make the mix interesting, was paramount. At the end of recording a lovely passage for ‘San Remo’, a guy came by with a parcel. I was so annoyed at his timing! Instead of recording the piece again, I wanted to express my anger. ‘Juice Tonight’ was the result. The transitions in False are based on ‘How do I feel now? What should happen next?’”

That such a powerful piece as ‘Juice Tonight’ had its genesis in the mundane beginnings of a parcel delivery is emblematic of Lambert’s vision of truth and lies which he’s explored in True and False: a musician’s truth doesn’t have to be the same as the listener’s. “I enjoy that I don’t need to bring the same objectivity to truth as a politician, historian or journalist,” Lambert says. “When people talk about truth, they often say we shouldn’t talk about feelings. That’s true in politics and history, but not necessarily music. The truth a listener feels when they hear my music, that’s their truth – even though it doesn’t have anything to do with my truth as the music’s creator. It’s hard for me to break down my music and say ‘That song was written because I felt sad that day.’ When other artists can tell those stories about their music in an entertaining way? Fantastic! But I never view that as the truth either.”

Lambert is also happy that the everyday biographical details of his identity remain uncertain behind that mask. Some journalists have speculated that this compelling music can’t really be made by a previously unknown newcomer. Fans have speculated that Lambert is really another contemporary musician: Chilly Gonzales and Nils Frahm’s names have been mentioned. “These other musicians: they are maybe Lamberts,” responds Lambert. “Perhaps they too copy the idea of the Lambert. If that’s what people think, I’m not upset, because it means the knowledge and idea of the Lambiverse is expanding.” Even the mask itself isn’t necessarily a constant, as Lambert reasons: “People connect my masks with my music, but it’s not necessary. I like that these masks make me appear taller on stage, which helps makes the stage a safe space. But if I have a new project that makes another design of mask worth developing, I would.”

As is clear by now, the truth about Lambert is subjective. Lambert has been kind enough to credit me as one of the leading theorisers of the Lambiverse after my work on the podcast series that will accompany False: it’s a brave listener who will explore the role of Lamberts in ancient history laid out within. It’s a history that is… unsettling. As you can see, Martin Stollmayr is credited as the collaborator on the meditative ‘Dorian’ on False. “He is a very serious scientist who has studied Lambertism for many years,” enthuses Lambert. “I admire his precise history of Lamberts. I asked myself: ‘How is it possible such a brilliant scientist is also able to deliver musical content to the standard of a Lambert?’”

To future historians of the Lambiverse, it’s clear how key False is in spreading Lambert’s wisdom. And it’s interesting how modest Lambert himself is about its importance. “False has given me the freedom to develop myself artistically in all kinds of directions,” Lambert explains. “Even though False is so different from my previous records, there’s a trust in the listener that everything I do is connected. I enjoy that people give me the trust that my music is always connected to the Lambiverse. With False, I can now go anywhere.” Prophetic words. As the universe is contracting, the Lambiverse is expanding.